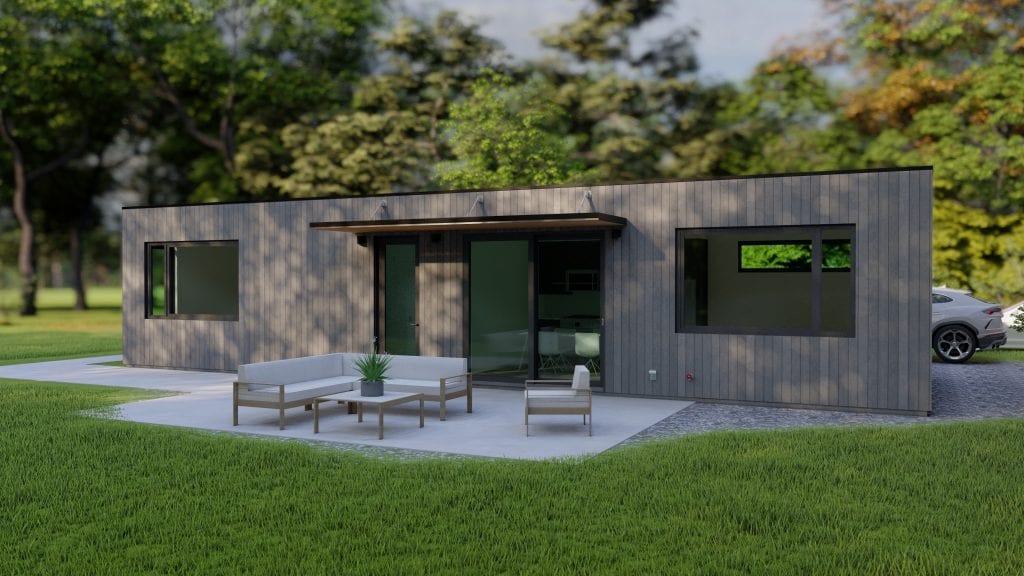 Here at Built Prefab we highly enjoy the look of low slope, and what many refer to as “flat” roofs. These roofs just speak contemporary design and bring a nice clean look to homes.

Additionally, we feel homes with flat roofs blend in much better aesthetically in nature than homes with pitched roofs. The flat roof sits clean on the horizon and doesn’t break up the scenery the same way as a triangle pointing to the sky.

Here are a couple of photos of the types of roofs we are talking about.

There are a few common misconceptions about these roofs, and thought it would be handy to write a blog about them.

The top three things we hear about flat roofs are:

These are just common misconceptions, so let it be known, you have nothing to fear!

Rain has nowhere to go.

We think the origin of this misconception comes from the use of the word “flat” in the name flat roofs and when looking at a flat roof home from the street, it looks flat.

The misconception of the flat roof is rampant, but guess what? There is actually no such thing as a flat roof.

Every single roof has some slope in it to direct the moisture to a desired location and get it down to the ground.

While flat roof is not actually flat it looks that way because there is a little wall that stands above the sloped area called a parapet, and the sloped roof itself is lower than what you can see from the street. Here’s a photo of a parapet and what the flat roof might look like up top:

There are many ways to get the moisture off the roof once it gets to that point such as roof drains, scuppers or eaves troughs.

However, never let the name fool you – there’s no such thing as a flat roof, it always slopes and drains somewhere.

Snow is really heavy and a flat roof can’t handle the weight.

While snow might seem concerning, particularly in locations where there is lots of it, this is one of the biggest misconceptions with respect to flat roofs.

Every flat roof is engineered for the location where it is going and the engineering factor used in designing every roof considers making the roofs able to withstand much more than the highest amount of snow that might be received in an area in a 50 year period.Â

Pitched roofs are engineered the same way, thus the chance of a failure of a flat or low slope roof is equal to that of a pitched roof, and both are extremely low.

Additionally, when you live in a climate where temperatures get low snow on top of the roof actually acts as more insulation to help keep your house warm.

Finally, in areas where there is a lot of snow, it can actually sometimes be dangerous to have the snow shed from a pitched roof if the roof is not designed properly. In some instances snow will adhere to high slope metal roofs, until sufficient weight accumulates, and then it all comes crashing down with major consequences to bystanders or neighboring property.

… and what of the gutters on a home where snow is always sliding off? Check this one out:

The next time you are driving through high snowfall towns like Rossland, Whistler, Revelstoke or Banff take a look at the downtown buildings and you will see many flat roof buildings that have been there for many years housing banks, grocery stores and the like. Those places have seen their share of snow!

The irony is that a flat roof is less likely to leak than a pitched roof, not more.Â

The materials used to weather-proof a flat roof are much larger than the individual shingles used on a pitched roof. Large pieces of rubber type material are basically adhered to the surface of a low slope or flat roof, and less breaks in the materials means less opportunities for water to get under it.

If you would like to read more about flat roofs, check out this great blog at roofslope.com.

Built Prefab is a licenced general contractor that designs and manufactures premium prefab modular homes in Kelowna, British Columbia and ships them across Western Canada.